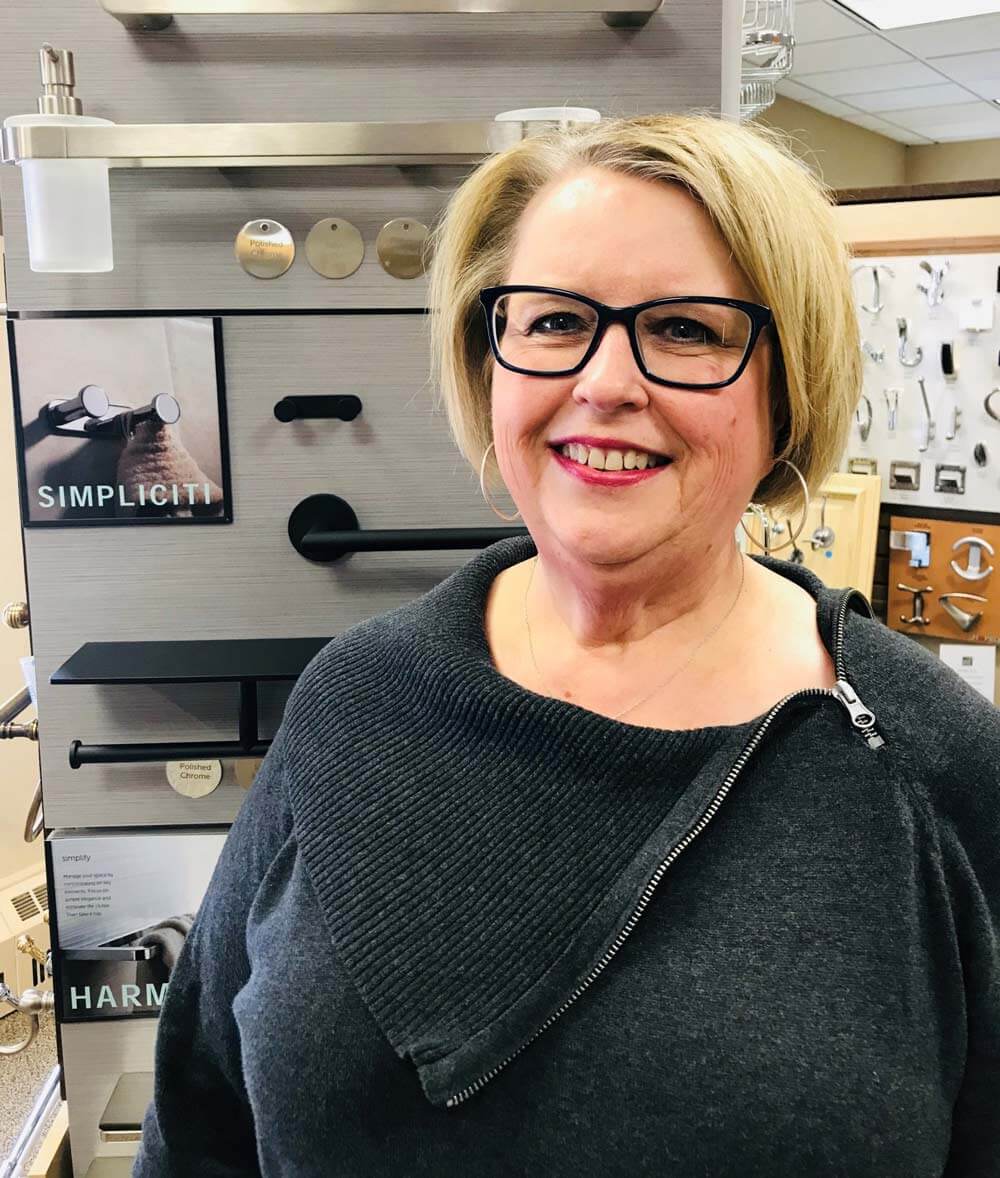 Ellen is the heart of the company having been the manager since Nob Hill re-opened it’s doors in 1999 under new ownership. Her vast knowledge of product along with her fun infectious personality keeps our clients coming back. Ellen’s motto of “do it right the first time so you do not have to do it again” reassures our clients of her dedication to getting the orders right so there are no issues on the job-site. She enjoys the challenge of large complicated projects as well as a project on a budget. If you have the pleasure of working with Ellen, your project will benefit from her expert design service and years of experience. 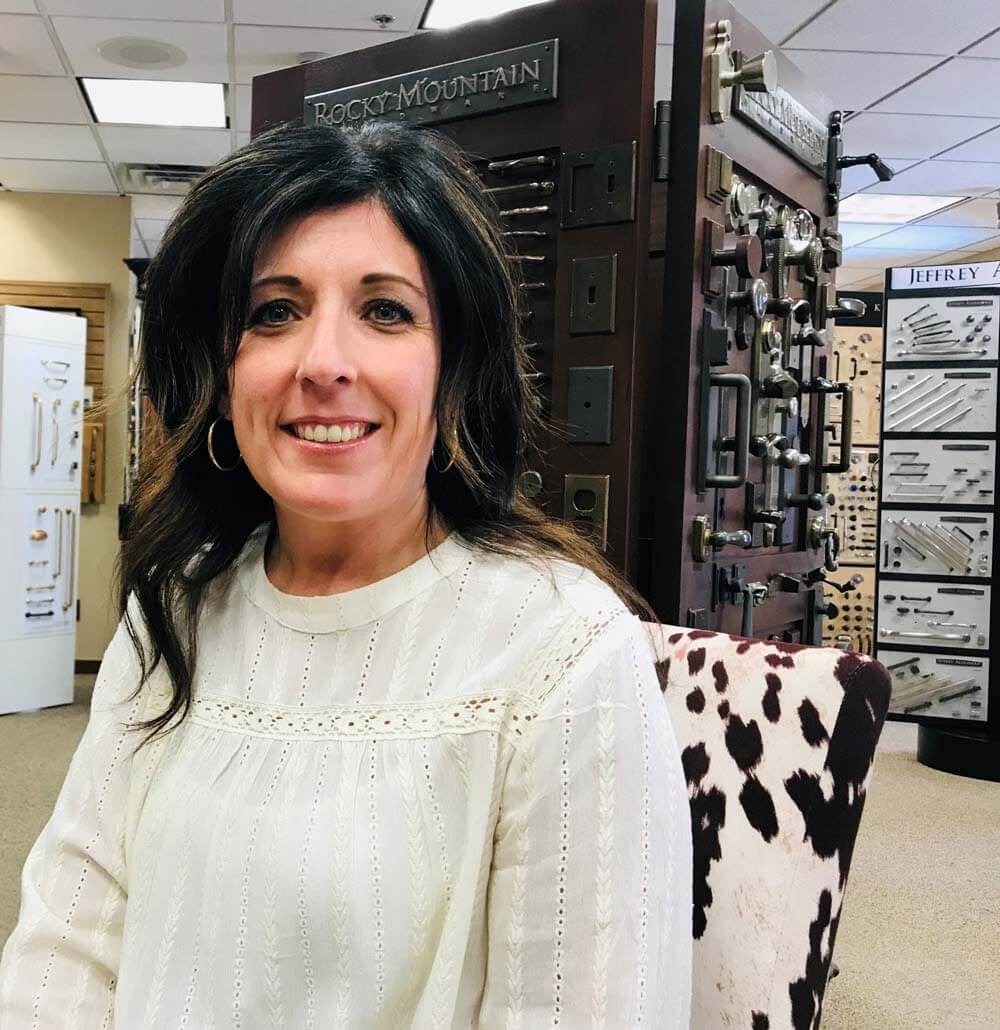 As a Sales Associate at Nob Hill, Shelly Lindstrom brings years of experience from the design build industry to the hardware selection process. With a bubbly can do attitude, attention to detail and creativity, she will help you bring your vision to life. She is also our resident problem solver. She works hard to solve hardware issues and will find a solution to fix the problem and won’t give up till she does. Shelly is always full of positive vibes and is always a pleasure to work with. 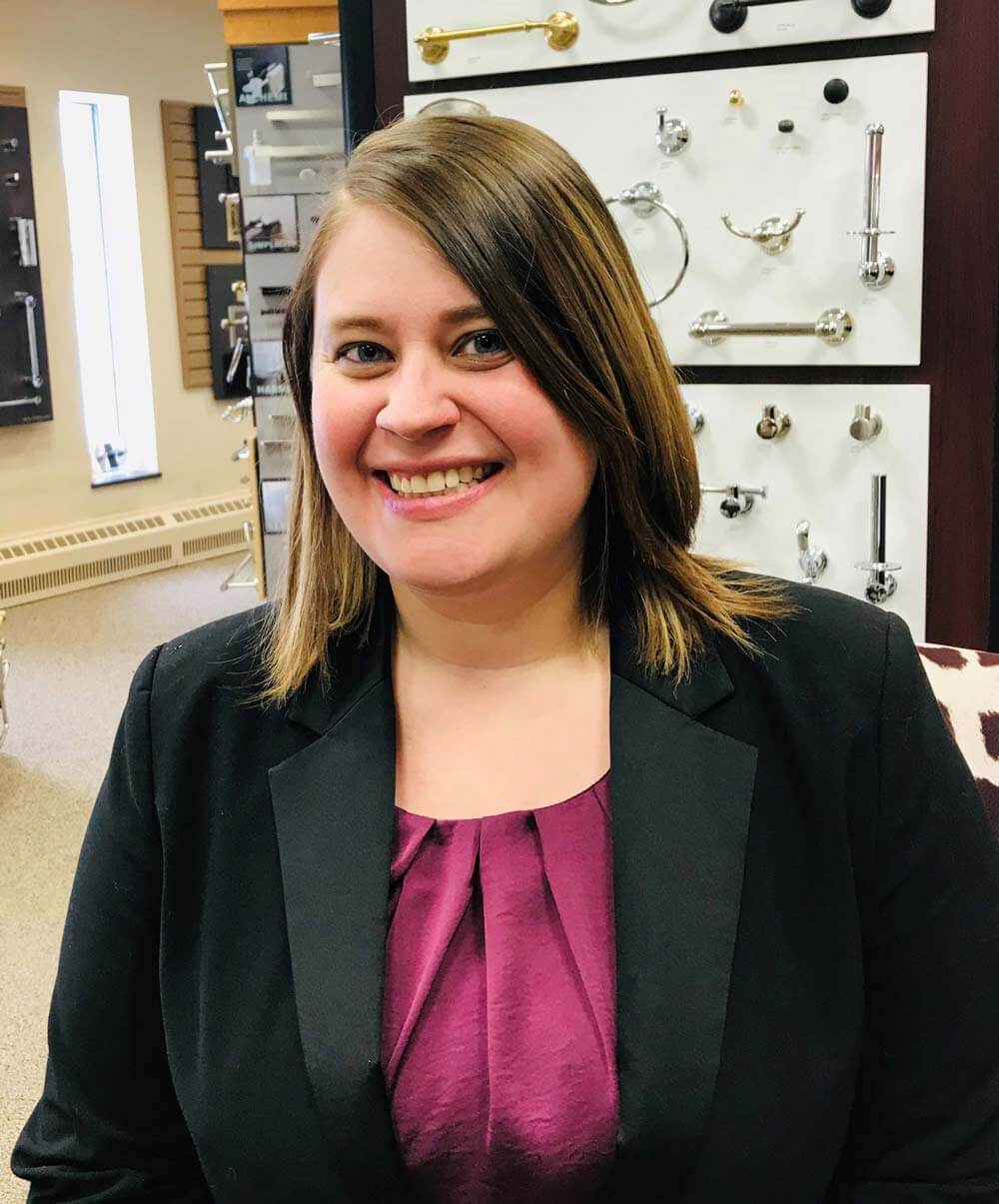 Chrissy Reinert is Nob Hill’s Office Manager and has been with us since 2014. While Chrissy directly handles Client billing, purchasing and vendor correspondence, she oversees all day to day office functions. She is the backbone of the office and is always readily prepared to assist with any issue or inquiry one may have. Chrissy thoroughly enjoys working closely with Clients and always has a sunny disposition. 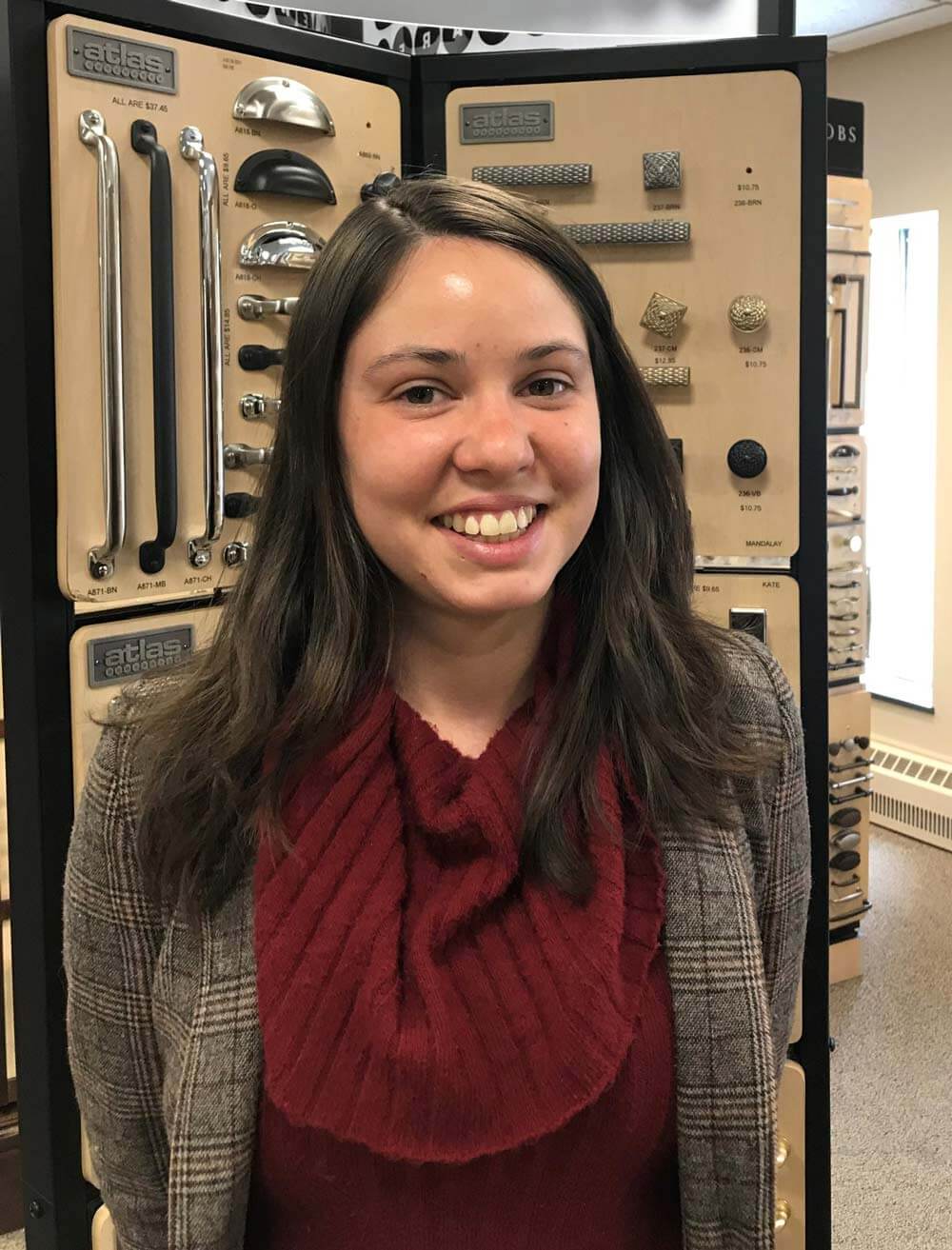 Conscientious is one of the words I would use to describe Kim. She is an excellent addition in our Accounts Payable Department. She is very organized as she has to wear many different hats, one being a friendly face to assist with our sales associates. She has a very optimistic look on everything, which makes her a great member of the Nob Hill Family. 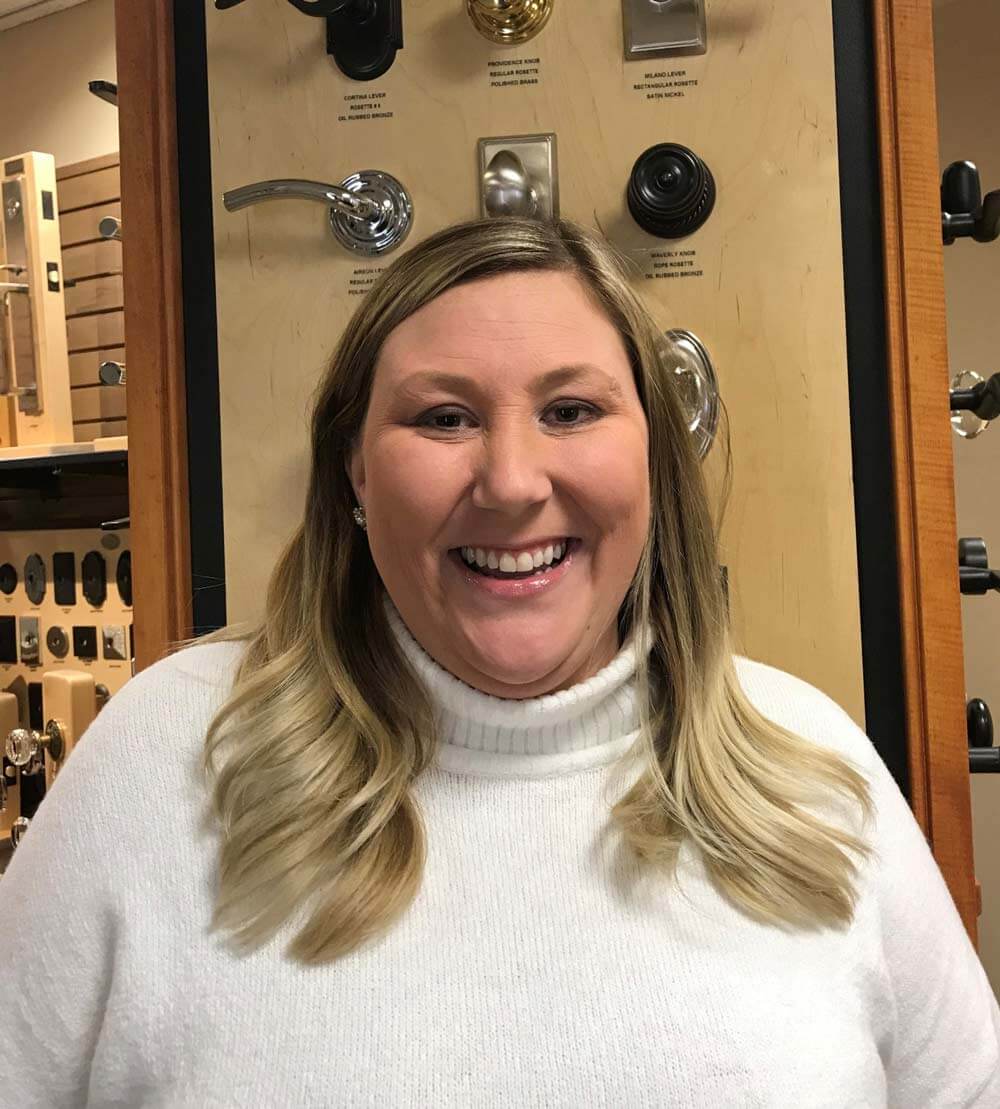 New to the Nob Hill Team, Stacy Heyer is the friendly voice who greets our callers, and the smiling face to greet you as you enter our show room. She ensures that our orders are correctly placed, and that all hardware items are accounted for at pick-up. She brings a contagious enthusiasm and eager interest to learn more in the hardware design industry . 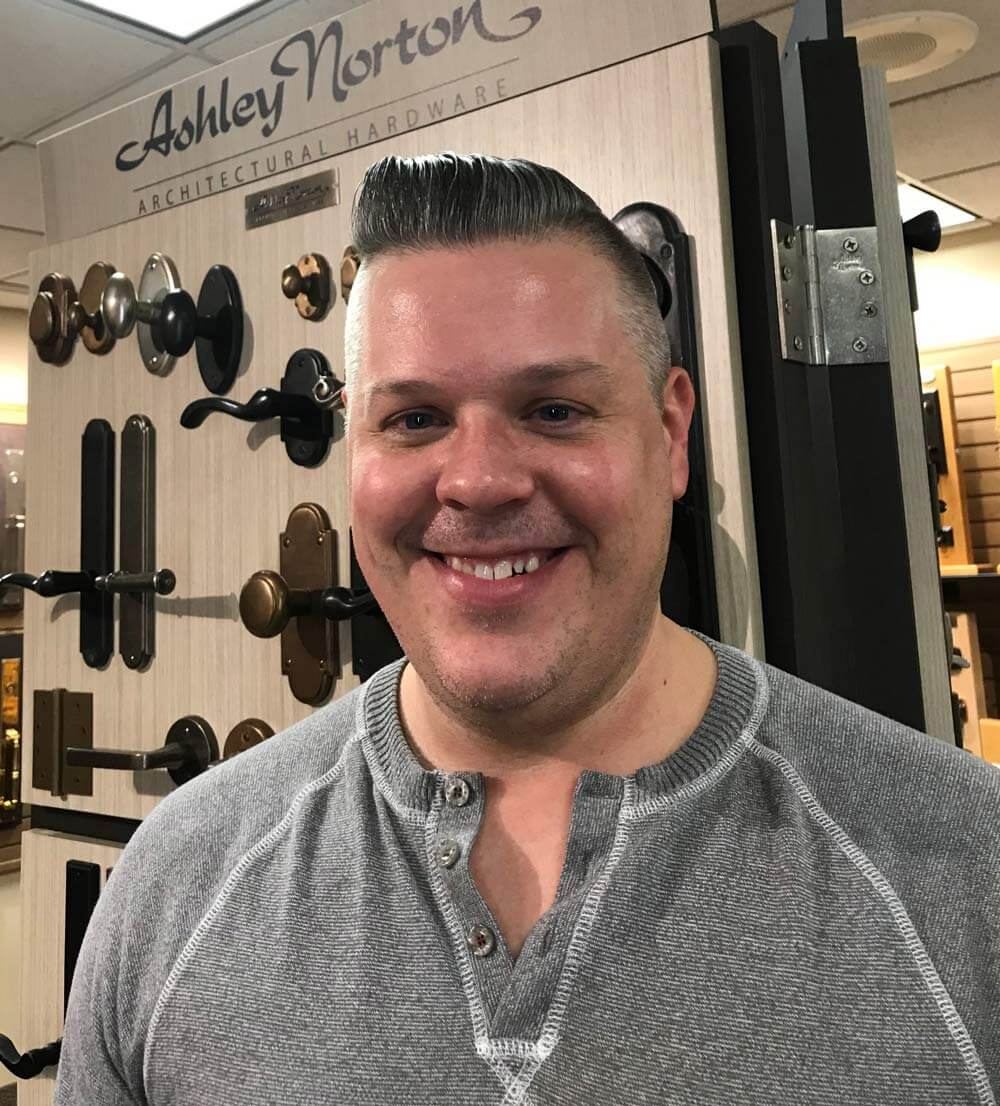 Chris is no stranger to the construction and design industry, Chris’ background in architecture, affinity for organization and extreme attention to detail allow him to thrive in this position. Clients may not always get to meet the man behind the scene but be assured your order accuracy and satisfaction are his number one priority. 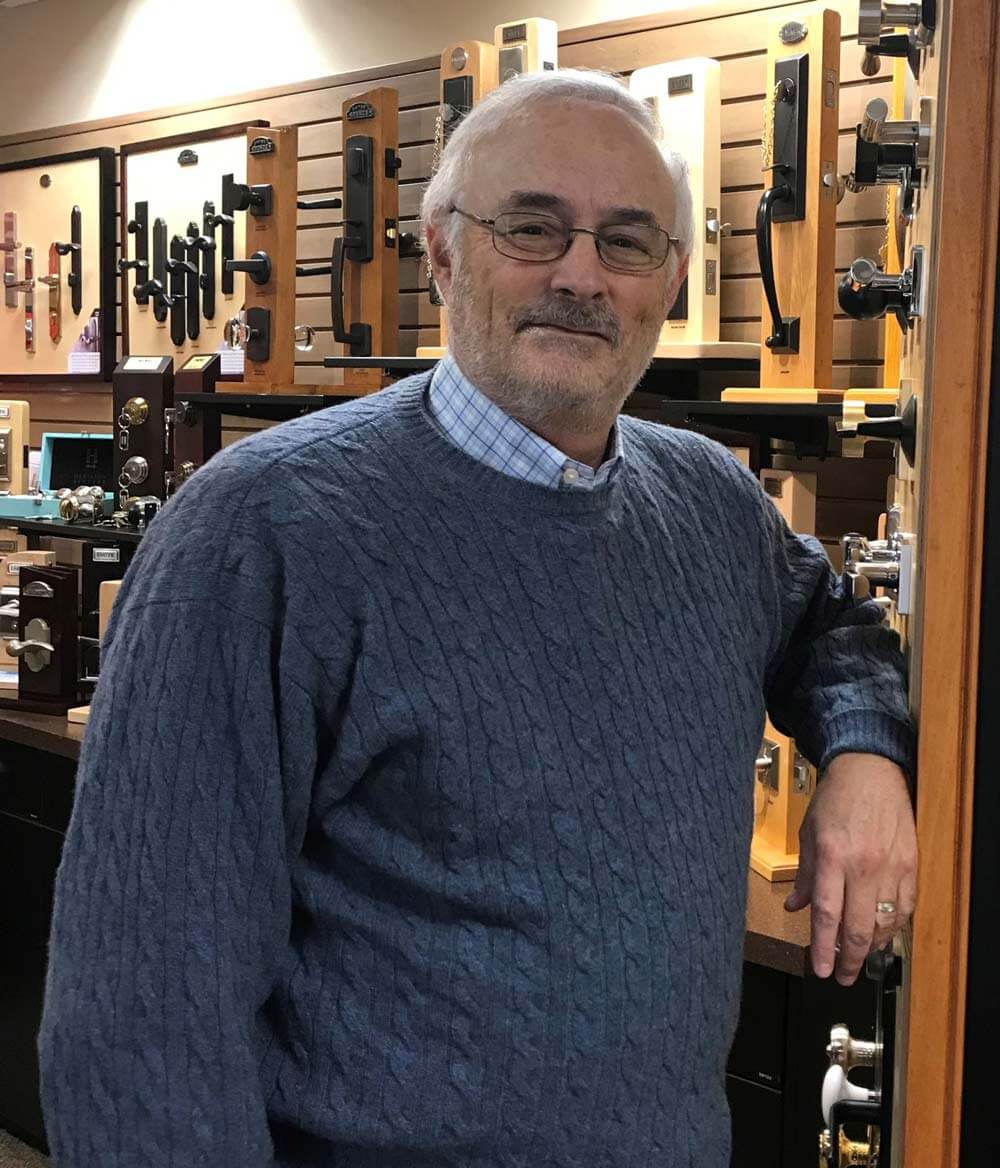 Michael Karch is the owner of Nob Hill Decorative Hardware and Floyd Total Security. Michael began his career to Floyd Lock and Safe Company as a locksmith back in the 1960’s. Floyd sold and installed deadbolt locks and all types of commercial hardware, safes and vaults.

Michael grew up in South Minneapolis, and attended St. Cloud State and the University of Minnesota. After military service, Michael graduated from Concordia with a degree in business communications and organization. He continued at Floyd starting the security alarm division and continued at Floyd purchasing Nob Hill in 1999. Michael lives in Minnetrista with his wife Beverly and Labradoodle Max. 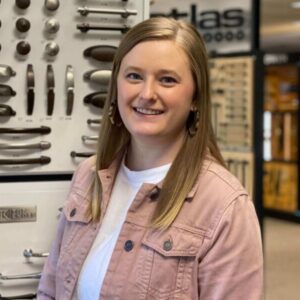 Allie Harker originally joined the Nob Hill Team in 2011. She left in 2018 and spent some time learning the door industry. In 2021 she came back to Nob Hill as a sales associate and a brand new mom of one lucky little boy. Her years of experience in decorative hardware is invaluable and it shows when working with clients. Her cheerfulness and radiant smile is always welcoming. 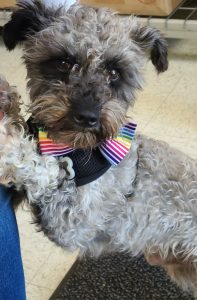 Hi!  My name is Louie and I am the new Nob Hill official show room dog!  My Mom is Ellen.  She rescued me in March of 2020.  I came up from Oklahoma and suddenly my life changed and I feel like the luckiest dog in the world!  I get to go to work with her every day.  I love to run around and play.  Please don’t be upset with me if you find a tennis ball or toy at the front door.  My best friend Chris was probably throwing them for me and then I happened to look outside and saw a squirrel.   (Those things are hard to catch!)  I’m trying to be better about cleaning up my toys.  I know it will never happen, but the humans around here think I’ll learn.

It was really slow and quiet when I first started going to work but now more and more people are coming into the showroom and I’m sure they are all here to see me.  I love to welcome people!  After lunch I get to go on a long walk with my Mom and then I am wiped out for the rest of the day.  My Mom has the most comfortable bed for me in her office.  How does everyone else around here go without a nap???  I don’t understand humans.  If you want to meet me in the afternoon, just ask the front desk to page me.  I will come running, and say hi!